also gather our season’s supply of blueberries. But the late warmth stunted the blueberry crop and when we inspected the bushes available for u-pick there were more green than blue berries. After a few busy weekends recently, we finally had a chance to head out and get our blueberries today.

I drive by River Bend Farms on Highway 58 frequently, and saw their sign advertising blueberries, but I wasn’t sure if they offered u-pick. So I called them this morning (phone: 520-2561) and Annette informed me that while they don’t offer u-pick berries, she could recommend a few nearby farms to check out: McKenzie River Organics, Adkins Farm, and Blondie’s Blooms. 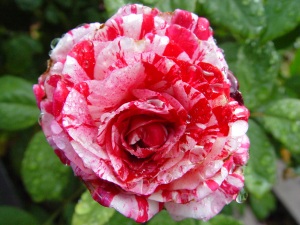 to check out Blondie’s or Adkins. We searched for a phone number for Adkins and couldn’t find a single reference to the farm, but we figured there would be signage along Seavey Loop (Note: I later found a classified ad in the Register Guard, and Adkins’ phone is 579-5431). Blondie’s is along Cloverdale Road between Pleasant Hill and Creswell. Because of a missed exit at 30th St. on I-5, we decided to first go ahead and check out Blondie’s, which Annette had reported had young berry bushes. We arrived at the nursery and blueberry farm and walked around and inspected the plants (mature nursery stock) and bushes, and even had the chance to listen to the fake predatory bird call. But after 26 minutes with no person in sight, we got in the car and drove over to Adkins (we later saw Blondie hocking her berries at the Saturday Farmer’s Market — so it’s possible that while she left the nursery in the hands of her family, they didn’t take their customer-service role seriously).

We got back in the car and headed west on 58 to Seavey Loop. We immediately saw a little white sign on a telephone pole advertising Adkins Farms blueberries, and we drove along until we saw the sign point to the right down a gravel road (coming from the other direction you would drive straight instead of following Seavey Loop road around a sharp right-hand turn). We drove slowly down the narrow road, passing a couple of philbert and apple orchards, and a small newly planted vineyard. At the end of the road is Adkins Farm, with raspberries, blueberries, and apples. ( 8-5 M-Sat. 579-5431). The farm is a

picturesque spot, with neatly mowed grass under the apple trees, a picnic table, and straight long rows of mature blueberry bushes. We followed the signs to the u-pick parking near the shed and checked in and got our buckets for picking.

I was directed to take note of an interesting paper wasp nest that had formed on a birdhouse on an oak tree (they observed my camera), and then we were off to pick. The berries were $1.50/lb, and we filled our buckets a little over 3/4 full each and walked away after about forty minutes with $9.50 in berries. We will be rinsing them and freezing some for later and using the rest in some pancakes and perhaps, if boyfriend is lucky, a pie. 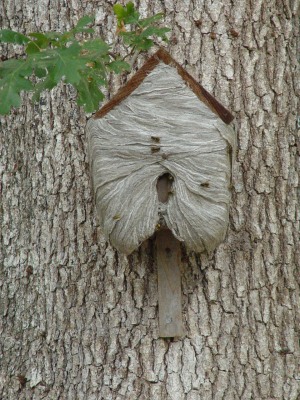 The blueberries should remain available for picking at local farms through the end of August. Also, if you go to Adkins, bring a container to take home your fruit in — they just provide the buckets for picking and a scale to weigh them, but no carry-home containers.

As we were searching for a phone number for River Bend Farms we came across this handy list of Oregon roadside farm stands which is a great resource for these kinds of local food excursions!

The Oregon Blueberry Commission provides a listing of member farms in Lane County (and other counties), but it is incomplete. They also provide some interesting blueberry recipes.

The Berry Patch Farm near Leaburg, no spray, open M-Sat, 8-6

Some good friends of mine recommend Green-Hill-Aire’s Organic u-pick operation that is close to Eugene (28794 Hillaire Street); 688-8276. I called, they are going to be open 8/16 and 8/17 from 8-6; but they’ve been closed for two weeks because they had been picked out. Call for availability.

§ 9 Responses to Late season for blueberries in Eugene area

You are currently reading Late season for blueberries in Eugene area at Eat Local Eugene.